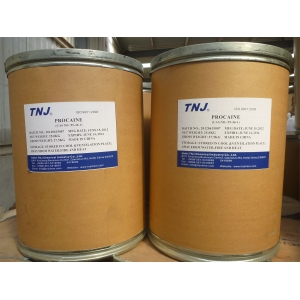 Procaine hydrochloride CAS 51-05-8, also called Novocain, or Novocaine, synthetic organic compound used in medicine as a local anesthetic. Procaine is a local anesthetic drug of the amino ester group. It is used primarily to reduce the pain of intramuscular injection of penicillin, and it is also used in dentistry. Owing to the ubiquity of the trade name Novocain, in some regions procaine is referred to generically as novocaine. Today it is used therapeutically in some countries due to its sympatholytic, anti-inflammatory, perfusion enhancing, and mood enhancing effects.

Procaine HCI is one of a new class of anti-cortisol (to reduce levels of the stress causing hormone called cortisol), steroidogenesis inhibitor drugs which are being tested for treatment of conditions such as Alzheimer's disease.

- Procaine is also used to control the pain of intramuscular injection of penicillin as well as in dentistry.

- It acts mainly as a sodium channel blocker