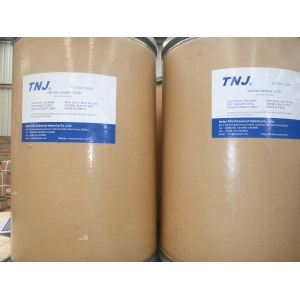 
Aminocaproic acid CAS 60-32-2 (6-aminohexanoic acid) is a derivative and analogue of the amino acid lysine, which makes it an effective inhibitor for enzymes that bind that particular residue. Such enzymes include proteolytic enzymes like plasmin, the enzyme responsible for fibrinolysis. For this reason it is effective in treatment of certain bleeding disorder. Aminocaproic acid is also an intermediate in the polymerization of Nylon-6, where it is formed by ring-opening hydrolysis of caprolactam.

Aminocaproic acid is fine,white,crystalline powder, practically odorless. Its solutions are neutral to litmus.Melts at about 205C. Freely soluble in water,in acids,and in alkalies; slightly soluble in methanol and in alcohol,practically insoluble in chloroform and in ether.

Aminocaproic acid is used to treat excessive postoperative bleeding, especially after procedures in which a great amount of bleeding is expected, such as cardiac surgery. It can be given orally or intravenously. A meta-analysis found that lysine analogs like aminocaproic acid significantly reduced blood loss in patients undergoing coronary artery bypass grafting. Aminocaproic acid can be used to treat the overdose and/or toxic effects of the thrombolytic pharmacologic agents tissue plasminogen activator (commonly known as tPA) and streptokinase.