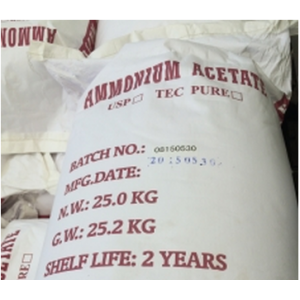 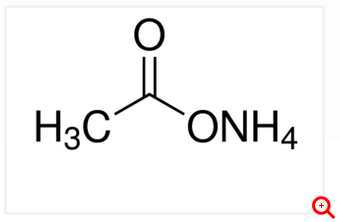 It is a white, hygroscopic solid and can be derived from the reaction of ammonia and acetic acid. It is normally used in medical field, food field, industrial field and other analytic field.

Ammonium acetate is widely used in the dyeing and printing of textiles to promote good leveling of the dyestuff on the fabric. It is often used in dye baths in conjunction with acids and other sails.

Ammonium acetate is also used in the manufacture of antibiotics and other pharmaceutical products, and in the surface treatment of metals.

Food additive
Ammonium acetate is also used as a food additive as an acidity regulator; INS number 264. It is approved for usage in Australia and New Zealand.

- As the salt of a weak acid and a weak base, ammonium acetate is often used with acetic acid to create a buffer solution.


- Ammonium acetate is useful as a catalyst in the Knoevenagel condensation and as a source of ammonia in the Borch reaction in organic synthesis.

- In agricultural chemistry used as reagent for determination of soil CEC (Cation Exchange Capacity ) and determination of available potassium in soil, ammonium ion is act as an replacement cation.

- In dialysis as part of a protein purification step to remove contaminants via diffusion.

- NH4C2H3O2 is occasionally employed as a biodegradable de-icing agent.

- It is the main precursor to acetamide.

- It is also used as a diuretic.