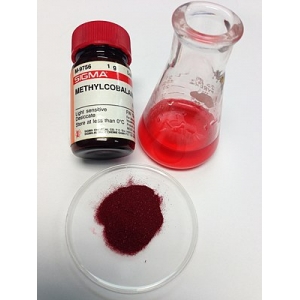 Mecobalamin (CSA No 13422-55-4),  is a cobalamin, a form of vitamin B12. It differs from cyanocobalamin in that the cyano at the cobalt is replaced with a methyl group. Methylcobalamin features an octahedral cobalt(III) centre and can be obtained as bright red crystals. From the perspective of coordination chemistry, methylcobalamin is notable as a rare example of a compound that contains metal-alkyl bonds. Nickel-methyl intermediates have been proposed for the final step of methanogenesis.

Methylcobalamin is equivalent physiologically to vitamin B12 and can be used to prevent or treat pathology arising from a lack of vitamin B12 (vitamin B12 deficiency), such as pernicious anemia.

Methylcobalamin is also used in the treatment of peripheral neuropathy, diabetic neuropathy, and as a preliminary treatment for amyotrophic lateral sclerosis.

Stored in day and cool place and keep away from strong light and heat.