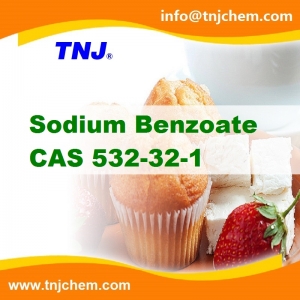 Sodium benzoate CAS 532-32-1 (E211), also called benzoate of soda, has the chemical formula NaC6H5CO2. It is the sodium salt of benzoic acid and exists in this form when dissolved in water. It can be produced by reacting sodium hydroxide with benzoic acid.

Sodium benzoate exists in white small granular or white powder, odorless or with slight odor of benzoic, soluble in water and alcohol. Sodium benzoate is a preservative. It is bacteriostatic and fungistatic under acidic conditions. It is used most prevalently in acidic foods such as salad dressings (vinegar), carbonated drinks (carbonic acid), jams and fruit juices (citric acid), pickles (vinegar), and condiments. It is also found in alcohol-based mouthwash and silver polish. It can also be found in cough syrups like Robitussin. Sodium benzoate is declared on a product label as 'sodium benzoate' or E211. It is also used in fireworks as a fuel in whistle mix, a powder which imparts a whistling noise when compressed into a tube and ignited.

1) As an excellent food preservative, can be used as the antiseptic sterilization of various food and beverage;

2) As antiseptic sterilization of various drugs in pharmaceutical industry;

3) It can be used in the production of metal’s corrosion inhibitor and antioxidant;

25kg plastic bag or according to the request of the customers.

Stored in cool and airy place; away from fire and heat; handle with care; no breakage, avoid leakage

This is classified as as a Common Good for transport.

Please refer to MSDS for more information about Safety, Storage and Transportation.