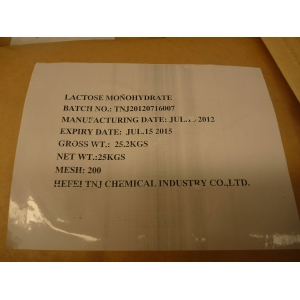 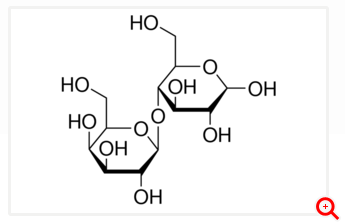 freely but slowly soluble in water,practically insoluble in ethanol (96 percent).

Lactose is a disaccharide sugar derived from galactose and glucose that is found in milk. Lactose makes up around 2–8% of milk (by weight), although the amount varies among species and individuals, and milk with a reduced amount of lactose also exists. Lactose is a type of sugar that is found in milk and milk products, including human milk. Also called milk sugar, it is not found naturally in any other food. This sugar is made of carbon, hydrogen and oxygen, and it has the chemical formula of C12H22O11.

Lactose is mainly used in food and pharmaceutical industry

1)  The product can be used as tablets and capsules of the filler or diluent
2)  It also used for freeze-dried products and baby food formulations.
3)  Lactose is also used in powder inhalation of diluent.
4)  Used as pharmaceutical excipient.
5)  Used for the determination of gold reagent
6)  Used for the preparation of biological medium
7)  A kind of chromatographic adsorption