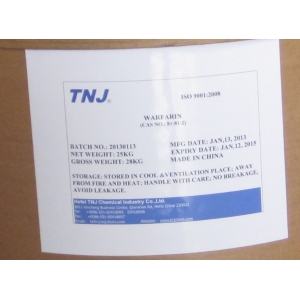 Warfarin (CAS 81-81-2) is a colorless, odorless crystals powder, is an anticoagulant normally used in the prevention of thrombosis and thromboembolism, the formation of blood clots in the blood vessels and their migration elsewhere in the body,respectively.

Warfarin was initially introduced in 1948 as a pesticide against rats and mice, and is still used for this purpose, although more potent poisons such as brodifacoum have since been developed. In the early 1950s, warfarin was found to be effective and relatively safe for preventing thrombosis and thromboembolism in many disorders. It was approved for use as a medication in 1954, and has remained popular ever since. Warfarin is the most widely prescribed oral anticoagulant drug in North America.

Warfarin is used to decrease the tendency for thrombosis or as secondary prophylaxis (prevention of further episodes) in those individuals who have already formed a blood clot (thrombus). Warfarin treatment can help prevent formation of future blood clots and help reduce the risk of embolism (migration of a thrombus to a spot where it blocks blood supply to a vital organ).


Warfarin is best suited for anticoagulation (clot formation inhibition) in areas of slowly running blood (such as in veins and the pooled blood behind artificial and natural valves) and in blood pooled in dysfunctional cardiac atria. Thus, common clinical indications for warfarin use are atrial fibrillation, the presence of artificial heart valves, deep venous thrombosis, and pulmonary embolism (where the embolized clots first form in veins). Warfarin is also used in antiphospholipid syndrome. It has been used occasionally after heart attacks (myocardial infarctions), but is far less effective at preventing new thromboses in coronary arteries. Prevention of clotting in arteries is usually undertaken with antiplatelet drugs, which act by a different mechanism from warfarin (which normally has no effect on platelet function).

25kgs in fiber drum with inner plastic bag. It also can be packed according to clients' request.

Stored at a dry and ventilated location away from fire and other dangerous goods, and should avoid direct sunlight.