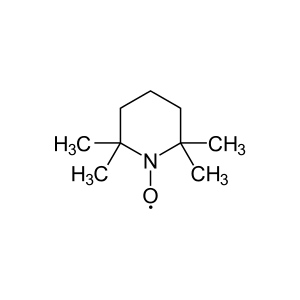 Buy 2,2,6,6-Tetramethylpiperidinooxy (CAS No 2564-83-2),  commonly known as TEMPO, is a chemical compound with the formula (CH2)3(CMe2)2NO. This heterocyclic compound is a red-orange, sublimable solid. As a stable radical, it has applications in chemistry and biochemistry. TEMPO was discovered by Lebedev and Kazarnowskii in 1960. It is prepared by oxidation of 2,2,6,6-tetramethylpiperidine. TEMPO is widely used as a radical marker, as a structural probe for biological systems in conjunction with electron spin resonance spectroscopy, as a reagent in organic synthesis, and as a mediator in controlled radical polymerization. The stability of this radical is attributed to the resonance provided by non-bonding electrons on the nitrogen atom, which form a 2c3e (half-) bond between nitrogen and oxygen, and hyperconjugative ability. Additional stability arises from the steric protection provided by the four methyl groups adjacent to the nitroxyl group; however, the methyl groups prevent a double bond occurring between either carbon adjacent to nitrogen. The stability of the radical is also indicated by the weakness of the O–H bond in the hydrogenated derivative TEMPO–H. With an O–H bond dissociation energy of about 70 kcal/mol, this bond is about 30% weaker than a typical O–H bond.

2)TEMPO itself is relatively inexpensive, but there are TEMPO derivatives that are often used such as 4-hydroxy-TEMPO (TEMPOL) or 4-acetamido-TEMPO that have cheaper precursors. Examples of TEMPO use in chemical industry are bisnoralcohol (a steroid) to bisnoraldehyde conversion by Upjohn and retinol to retinal conversion by Novartis. One industrial method employs H5PV2Mo10O40 as co-oxidant, the reduced form of which can be reoxidized by atmospheric oxygen. Polymer-supported TEMPO catalysts are also commercially available.

Stored in dry and cool place.