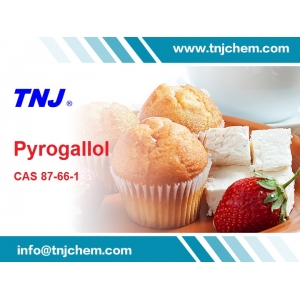 Pyrogallol powder (CAS 87-66-1) is odorless white powder, and used to analyze and determine oxygen, food etc. One can find its uses in hair dying, dying of suturing materials and for oxygen absorption in gas analysis. It also has antiseptic properties. Pyrogallol was also used as a developing agent in black-and-white developers, but its use is largely historical except for special purpose applications. (Hydroquinone is more commonly used today.)


Pyrogallic acid is used in determination of oxygen, antimony, bismuth, cerium, iron, molybdenum, tantalum,etc.
It is Widely used in pharmaceutical, dyestuff, chemical and food industries, for developer in photography.
- Used as chemical reagents
- Used in such industries as pharmaceuticals, dyes, chemicals.
- Used as photographic developer.