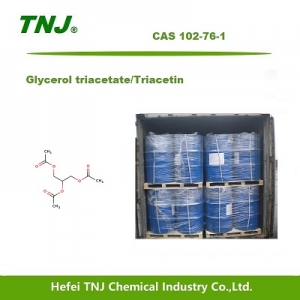 It is the triester of glycerol and acetylating agents, such as acetic acid and acetic anhydride.It is a colorless,
viscous and odorless liquid.

- Triacetin is an artificial chemical compound, commonly used as a food additive, for instance as a solvent in flavourings,and for its humectant function. It is used as an excipient in pharmaceutical products, where it is used as a humectant, a plasticizer, and as a solvent.

- Triacetin can also be used as a fuel additive as an antiknock agent which can reduce engine knocking in gasoline, and to improve cold and viscosity properties of biodiesel.
- The triacetin is applied to the filter as a plasticizer.
- Triacetin has been considered as a possible source of food energy in artificial food regeneration systems on long space missions.It is believed to be safe to get over half of one's dietary energy from triacetin.