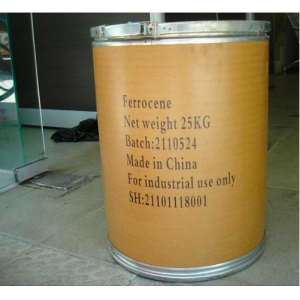 (2) Used as catalyst. As for the production of synthetic ammonia as catalyst, curing agent, silicone rubber, Can prevent the degradation of polyethylene on the role of light, can be used for plastic film, so that the degradation of natural fracture in a certain period of time, does not affect the cultivation and fertilization.

(3) Used as a gasoline antiknock agent. Can replace gasoline as toxic tetraethyl lead antiknock agent, made of high-grade unleaded gasoline, to eliminate fuel discharge on environmental pollution and harm to the human body.

(5) in chemical properties, ferrocene and aromatic compounds are similar, not easy to react with, prone to electrophilic substitution, for metallization, acylation, alkylation and sulfonation, hydroformylation and ligand exchange reaction, thus preparing a series of wide derivatives.

It’s dangerous cargo with UN 1325 4.1/PG2.So that the storage should be pay more attention, we should put it in low temperature and dry place ,separate from with oxidant. Must be away from fire!