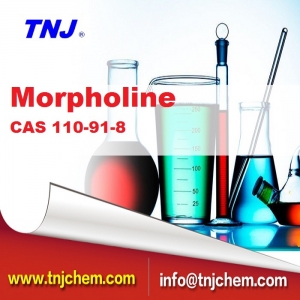 Morpholine CAS 110-91-8 is colorless and hygroscopic liquid in normal temperature. It smells special ammonia. It can be soluble in any volume water. It is soluble in such organic solvents as aromatic hydrocarbon, alcohol, ketone, aether and other organic solvents. It is slightly soluble in mineral oil and aliphatic hydrocarbon. It has slight toxicity. Morpholine reacts with inorganic acid to generate salt, with organic acid to generate salt or acylamide.

Industrial applications
Morpholine is a common additive, in parts per million concentrations, for pH adjustment in both fossil fuel and nuclear power plant steam systems. A great deal of morpholine is used for antirust, descaling and metal cleaning, especially for antirust and anticorrosive in high temperature conditions. In boiler maintenance fields, amount of morpholkine is also used as descaling agent. Owing to its unique chemical characters, morpholine has become one of the most important fine petroleum chemical products and its applications are very wide.

It is commonly used to generate enamines. Morpholine is widely used in organic synthesis. For example, it is a building block in the preparation of the antibiotic linezolid, the anticancer agent gefitinib (Iressa) and the analgesic dextromoramide. Its application in such fields as medicine, pesticide, animal medicine, petroleum and extraction of coke aromatic hydrocarbon have been ceaselessly developed and carried out.
Agriculture
As a fruit coating
Morpholine is used as a chemical emulsifier in the process of waxing fruit. Naturally, fruits make waxes to protect against insects and fungal contamination, but this can be lost as the fruit is cleaned.
As a component in fungicides
Morpholine derivatives used as agricultural fungicides in cereals are known as ergosterol biosynthesis inhibitors such as Amorolfine, Fenpropimorph, Tridemorph