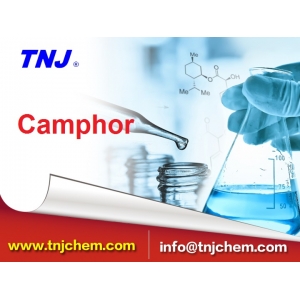 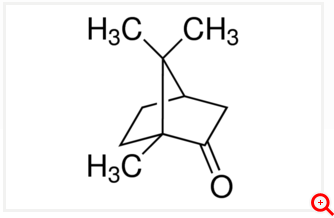 with a cool and refereshing odour,easily soluble in organic solvents, easyily sublimation. Camphor is a waxy, flammable, white or transparent solid with a strong aroma. It is a terpenoid with the chemical formula C10H16O.

Camphor is found in the wood of the camphor laurel (Cinnamomum camphora), a large evergreen tree found in Asia (particularly in Sumatra, Indonesia and Borneo) and also of the unrelated kapur tree, a tall timber tree from the same region. It also occurs in some other related trees in the laurel family, notably Ocotea usambarensis. Dried rosemary leaves (Rosmarinus officinalis), in the mint family, contain up to 20% camphor while camphorweed (Heterotheca) only contains some 5%.Camphor can also be synthetically produced from oil of turpentine. It is used for its scent, as an ingredient in cooking as an embalming fluid, for medicinal purposes, and in religious ceremonies. A major source of camphor in Asia is camphor basil (the parent of African blue basil).

Camphor can be used within:

Storage
1.Camphor (Synthetic) is inflammable substance; it has pyrophorisity under the action of oxidant. The Burning point is 50℃, the pyrophorisity point is 375 ℃. The production facility must be obscuration strictly. The workshop should be ventilating.
2. When camphor (Synthetic) causes fire, please use mist water, carbon dioxide, dry powder, sandy soil to extinguish fire.
3. The camphor steam in the air should be no more than 3 mg/m3, otherwise, it may hurt people’s nerve.